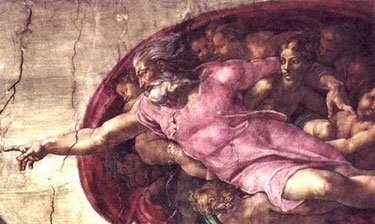 The fourth attribute of God we will be exploring is His omnipotence, which means the topic of discussion is God’s power. Omnipotence is simply the highfalutin way of saying “all-powerful”.  Therefore, when we say God is omnipotent we are saying He is able to do anything He desires or wills to do.   No better verse encapsulates this concept than Psalm 115:3.  “Our God is in heaven; He does whatever pleases Him.”

When we speak of power we are referring to ones ability to act or produce an effect.  Just like God we have the ability to effect things according to our will.  I exercise my power each and every day.  If I am hungry I make a meal, if the grass is long I mow it, and if I don’t like what is on television I change the channel.  We do have power, but the power we exercise only exists within very narrow limits. Case in point we can’t control the weather, we can’t avoid taxes, and we can’t live forever.

In stark contrast to His creation, God is not restricted in His power.  If we were to remove all the limitations of power, as it exists in us, we would begin to have an idea of the omnipotence of God.  He is all-powerful and has unlimited authority and influence.  He is not bounded by resources (Heb 11:3), constrained by imagination (Eph 3:20), nor hemmed in by probability (Matt 19:26).  God made all things to serve Him (Psalm 119:91), nothing is too hard for Him (Jer 32:17), no one can stop His plans (Job 42:2), and He does whatever He pleases (Psalm 135:6).  In essence God can do anything He desires.

We could be satisfied and rest here, were it not for one important caveat.  Although I have made it sound like God can do absolutely anything, there are some things that God cannot do.  No I am not downgrading God so that He is no longer all-powerful.  What I am doing is making a distinction in what He WILL do.  God can do all things He desires or wills.  However, God will not desire to do something contrary to His nature and character (2 Tim 2:13).  Everything that God does, or doesn’t do, will be entirely consistent and in harmony with the entirety of His character and nature.  Although God’s power is infinite He exercises His power in light of who He is.

This knowledge of God’s omnipotence should both encourage and excite praises in His people.  Why is that?  Meditate for a moment on the fact that we are kept, sustained, protected, and strengthened by a God who is not limited in power.  In Him (the omnipotent God) we live and move and have our being.  In light of God’s absolute power and authority we can have the utmost confidence in His ability to keep all of His precious promises.  Finally, for all of you mere mortals out there, as you attempt to serve and obey Him realize that you can only do so in the strength that He (the omnipotent God) has given you.  Rest assured, He who began a good work in you will be faithful to complete it (Phil 1:6), and that you can take to the bank.  Here are some more verses on God’s omnipotence.

Psalm 33:6 6 By the word of the LORD the heavens were made, and by the breath of his mouth all their host.

Psalm 147:5  Great is our Lord, and abundant in power; his understanding is beyond measure.

Jer 10:12  It is he who made the earth by his power, who established the world by his wisdom, and by his understanding stretched out the heavens.

Jer 32:17  ‘Ah, Lord GOD! It is you who have made the heavens and the earth by your great power and by your outstretched arm! Nothing is too hard for you.

Luke 1:37  For nothing will be impossible with God.”

Rom 1:20 For his invisible attributes, namely, his eternal power and divine nature, have been clearly perceived, ever since the creation of the world, in the things that have been made. So they are without excuse.