Have you ever contemplated the Holiness of God? If you have I am sure you have asked yourself, “What does ‘holiness’ mean?” There are a few really good working definitions floating around out there.  However, Sinclair Ferguson begins his definition not from man’s perspective, but from God’s. Here is a bit of what Ferguson has to say about the Holiness of God:

What then is God’s holiness? What do we mean when we say, ‘Holy Father’ and ‘Holy Son’ and ‘Holy Spirit’ and ‘Holy Trinity’?

We mean the perfectly pure devotion of each of these three persons to the other two. We mean the attribute in the Trinity that corresponds to the ancient words that describe marriage: ‘forsaking all other, and cleaving only unto thee’ – absolute, permanent, exclusive, pure irreversible, and fully expressed devotion.

When we grasp that this is true in the Trinitarian fellowship of God’s being it will help us understand several things about holiness.

First, that it is not something mechanical, or formal, or legal, or even performance-based. It is personal. In a sense ‘holiness’ is a way of describing love. To say that ‘God is love’ and that ‘God is holy’ ultimately is to point to the same reality. Holiness is the intensity of the love that flows within the very being of God, among and between each of the three persons of the Father, Son, and Holy Spirit. It is the sheer intensity of that devotion that causes seraphim (whose holiness is perfect but creaturely) to veil their faces.

So what should a church do when they find themselves with an abundance of Keurig ® coffee makers? This is the problem that is facing some good friends of mine at a Presbyterian Church here in my town. They had recently purchased a new (well new to them) church building and found its previous occupants had left behind many things, including more Keurigs ® than they know what to do with. Always the type to lend a hand, I took it upon myself to put together a proposal for the Senior Pastor (a friend of mine) to take forward to the Church Elders. The following is the actual proposal I submitted:

With the Heavenly Father, in his wisdom and divine providence, having placed in our care such a great abundance of Keurig ® coffee makers, how might we steward said appliances such as to maximize God’s glory and our enjoyment?

Here are the two ends for the Keurig ® coffee makers : I. The glorifying of God. II. The enjoying of God.

I hereto propose that Grace Presbyterian Church should open up a coffee shop to the Glory of God. If you brew coffee, sinners will come, thus making our evangelism more efficient. They will also bring their money with them (Prov 13:22b), thus helping fund further propagation of the gospel. In addition saint and sinner alike will be enjoying God’s creation of coffee, thus promoting his Glory. 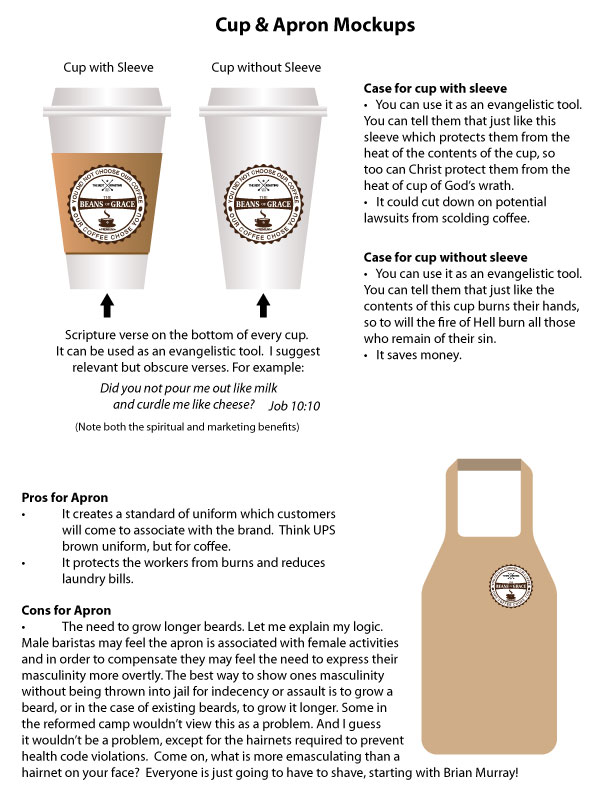 I’d love to be a fly on the wall at that meeting if he actually brings it forward.

In order to make up for my lack of posts I am uploading this past Sunday’s message. We discussed what is likely the most practical letter in the Bible – 1 Peter.  The letter answers a lot of important questions, the most crucial being, “How should Elect Exiles (Royal Refugees) live in a world that is not their own?”  I hope you enjoy.

The community where I am called to serve has had a devastating 2016. I say this due to the fact that since the beginning of the year five teens have chosen to end their lives. This has both rocked the community as well as brought the issue of teen suicide to the collective attention of my city. Naturally, when tragedy such as this happens we begin to ask questions… “Why did this happen? What can we do to prevent this? How can I help?” These questions are natural and necessary, and can pop up in conversations when you least expect them.

Take for example the monthly radio interview I do with our local Christian radio station. Every month I come in and give a brief 10 minute description of all the upcoming events at our church. We typically begin with pleasantries and idle chitchat before I move on to my list of events. This time I was hit with a more serious question about the issue of teen suicide. I took some time to speak to the topic, and then moved on to my list. I didn’t give the interview much thought until a local pastor called me and explained how thankful he was for everything that I had said. I can only assume that my response helped – at least for him – answer those natural and necessary questions everyone has been asking. You can find the audio for that interview at the bottom of this post.

Before you give the audio a listen, please understand that I generalized my comments. Although I understand there can be chemical and biological factors that cause depression, I did not specifically address those. Nor did I address the need for support programs or seeking the help of trained professionals. What I did do was give an answer for what the church can do. Can the church create programs, train counsellors and engage in community youth events? Yes and amen it can. However, as the unique body of Christ, the primary thing we can do is utilize the spiritual gifts and tools Christ has given us to use.  We can pray, and we can share the hope of His calling and the riches of His glorious inheritance. Feel free to listen and maybe place your comments below.

I have learned something very important about trying to be funny in today’s culture. However, before I share with you my well-learned lesson, I should take time to set the stage. Bring you in on my lesson, so to speak.

A friend of mine invited me to carpool to an upcoming event with a group of fellow ministers. Today, I happened to receive an email from one of those ministers asking if I would be willing to share in the driving duties. I was more than willing to help, so I planned to respond in the affirmative. However, being the way that I am, I also thought it would be fun to add a little humour to my response. In crafting the email I figured that I had to add just enough absurdity so that it would be both funny and obvious to the reader that I was joking. Here is what I wrote:

Before I commit to driving I must disclose some minor quirks you might find in my personality. I will totally understand if after hearing what they are you choose to pick someone else to assist you in driving. Here we go:

1) When driving I must have COMPLETE control of the radio. Because of my short attention span I will switch stations every 30 seconds. I hope this will not be a problem.
2) I don’t like to use cruise control. Instead I pulse the gas pedal as I drive. Anyone who is prone to seasickness should likely bring medication.
3) I am attracted to shiny moving objects, which means I tend to swerve into oncoming traffic. Therefore, it is likely best if we take deserted/secluded dirt roads, or at the very least do so when I am driving.
4) I suffer from night terrors, which strangely enough only manifest when I am awake. Don’t worry, most of my passengers have told me they quickly become accustomed to the shrieks of terror. I only warn you, as the first dozen or so times this happens can be a little disconcerting for the uninitiated.
5) I suffer from OCD.
5) I suffer from OCD.
5) I suffer from OCD.

I am more than willing to help drive if you are still willing to have me – even after having disclosed all my minor quirks. As the day gets closer please be sure to remind me about our 10am appointment at Enterprise.

Well, it was obvious from his response I had failed miserably. He totally thought I was serious, and graciously offered to find someone else to drive. I quickly crafted a follow up email explaining my failed attempt at humour and reiterated my willingness to help drive. He admitted I had totally ‘got him’. So how in the world could that happen? How could I get a person as intelligent as him to believe something so completely absurd? Well, he summed up his apparent gullibility by saying, “these days you never know.”

He has a valid point. No matter how absurd I could have made my letter, nor how ‘out there’ I could have made my quirks and demands, there was always the chance it was true. We live in a day where the absurd is no longer absurd. What once was unheard of or ridiculous is quickly becoming commonplace. Just check out your favourite source for news and see if I am wrong. You will be hard pressed to argue with his statement, “these days you never know.”

So there you have it, I have learned that life has just become a little bit harder. No longer can I rely on people’s ability to identify the absurd. No more can I expect something to be thought of as ridiculously unreasonable. No longer can I depend upon people having categories for the nonsensical, ludicrous or insane. However, here is the thing that hurts the most, no more can I use reductio ad absurdum and expect it to be understood. And that’s not funny.